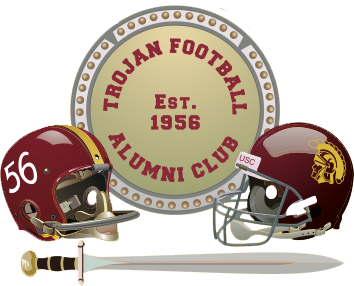 The Trojan Football Alumni Club (TFAC) was originally founded in 1956 when a handful of former players met up at the funeral of teammate, Jay Perrin. They realized they shouldn’t have to wait for a funeral to meet up and support each other.  Now, over half a century later TFAC is still going strong. This organization is the only one of its kind, no other college football team has an alumni support club!
TFAC is about mentoring the young Trojans and giving them guidance in life and in work.  Consider TFAC as a resource file of business and professional leaders who have the time available to meet with those seeking advice and direction.

A Message from the TFAC President

Since 1978, in partnership with the John Wayne family, TFAC has awarded post graduate scholarships to former players not pursuing professional football careers.

TFAC along with its many supporters were able to reach the goal of $500,000 to establish the Marv Goux Scholarship!

Ready to find out more?